The picture below is where this took place for two nights consecutively with different sightings for each including the *video I will attach. 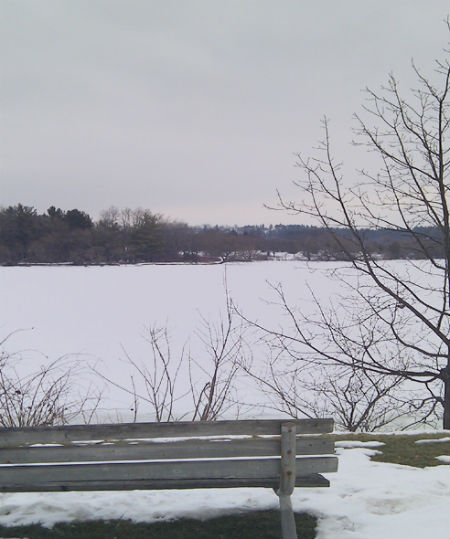 The picture below is a night time view (it needs to be flipped 90 degrees to the right so the lights line up with the horizon. I can't figure out how to do it). 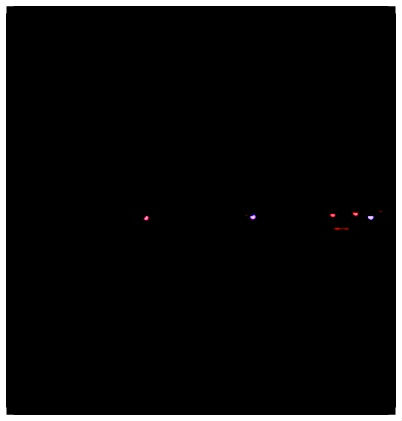 Webmaster's note: The image has been rotated as per the witness above.

This is a wider perspective put together by three shots. From left to right we see a high tree line 50 yards wide at least, to the right of that opens up into an open area where paved walkway trails run through. 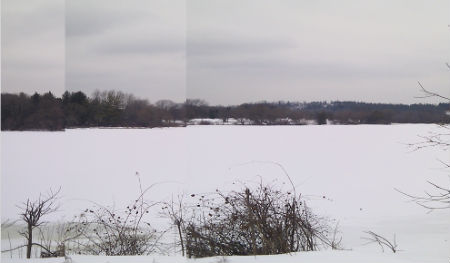 Right of that along the river, is London St. footbridge (the straight line with three pillars underneath to the far right). Unfortunately I took these with my phone, so the quality isn't fantastic, but this is to give you an general idea of the lay of the land from a day time perspective.

Looking at the night time example (remembering it needs to be rotated) to the far right is the street lights over the London St. foot bridge, to the left of that is 2 other street lights clearly visible at night.

Between these two street lights is where the video was recorded.

While walking south on Water St. (Peterborough Ontario) towards the downtown area, around 9:15pm, I looked left towards the river between Elcombe and London St. and noticed two bright lights hovering above the street lights.

I stopped to observe these lights because I had never noticed them before and I have walked that route through out my whole life. The lights were both extremely brilliant white lights above the distinct orange glow of the street lights which seemed to be just feet below.

One light was a rather large orb shape, the other looked to formed of three small balls of light, forming a rectangular shape. I observed the lights for at least 5 to 10 minutes, when the orb illuminated intensely for a second, and then dimmed out and disappeared.

I continued to observe the other rectangular light, and stopped a passer by which I happen to know rather well (I went to high school with them).

I did not tell her what I saw, I asked her “Do you see that?” Her reply was “That light above the street lights?” Confirmation of the sighting. We discussed it and parted ways, all along the light still sitting there until we were both out of sight of it.

I did not walk that way home that night, therefore I did not confirm if they were still there. The person who can confirm the sighting says on her way home she saw three lights, when before there was one (the second light dimmed out before they arrived).

I walked the same route the next evening, approximately 7:30pm (on my way to do groceries), I sat on the bench seen in the first picture (facing east), just to see what might happen. I hadn't been there for more than a minute when I saw a bright red, half sphere, with a clear silhouette above it.

The half sphere swung up (so the bottom of, whatever it was, was clearly visible) to the edge of the forward tree line across the river (in the 3 picture collage, where the snow ends to the middle left of the shot), then continued to swing back down just below the tree line, and level out.

It then immediately moved just below the tree line (in-between the forward tree line of the river and the second tree line where the suburbs begin) to the right, at a relatively fast speed, with no sound at all. My initial thought, when first observed, was thought to be a helicopter.

However, the object moved right, below the tree line and over the London St. footbridge, stops, and quickly changes direction the opposite way again.

The change in direction was almost immediate, maybe a second or two had passed. The object seemed to float and moved very gracefully. It came to a halt between and just above, the two street lights left of the footbridge, this is where I started recording. The event up until that moment was approximately 30 seconds to a minute in duration.

While recording the video, I clearly observed the object (the red half sphere and a silhouette, I am not sure how to describe it better). However, in the video, only three lights, a blue and two reds, appear to be moving in between the two street lights.

Just before the video ends, I quickly pan to the left to capture another light (this time very bright light like the night before, and very small) quickly travel to the top of the tree line (in the 3 picture collage where the first two tallest evergreens are located to the middle left) and back down again.

This lasted a few seconds at best, and I was not able to capture it due to the quality of the phone camera. Looking closer at the video, I noticed a third, red light, to the far left which is visible for a few seconds, and is in line with the other lights. I will continue to document this by getting better photos and try and give a very clear picture of the location where they were flying.

This is all I have at the moment, but I hope you can get a bit more out of the video than I have been able to. I have been trying to eliminate the darkness and try and get a clearer look at the tree line. I don't have very good software for that, but I noticed if you take the saturation to deep red, and the contrast right down, you can clearly see the lights moving, which seem to disappear and reappear. I think this is because of the trees blocking the light from view briefly, and you are still able to see movement.

One more note I should mention. When I returned home from grocery shopping, I went back downtown to meet some friends, and took the same route. I did not see the same lights, however I did see a very intense bright white light, an orb, appear, and then streak across the tree line exactly where the others were seen. This looked like a line of light, like a bright white tadpole, and shot out of sight along the tree line of the river.

Another interesting fact about that night, my friend is going for his pilots license at the local airport, and told me a plane had equipment failure and had to glide in for a crash landing. Just an interesting little event the same night, makes you wonder.