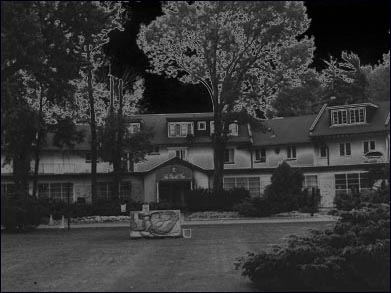 Nestled high on the Scarborough Bluffs in Ontario Canada is the historic Guild Inn. Surrounded by lush forest, beautiful statues, objects d' art, and a panoramic view of L. Ontario, the Guild was a favourite spot for weddings and other joyous occasions. Movies and t.v programs such as the Skulls, and Relic Hunter have been filmed there. Famous guests include Canadian PM Lester B. Pearson, Burt Reynolds, Kathleen Turner, Christopher Reeve, Sir Lawrence Olivier, Lorne Greene, Kevin Sorbo and many others. Guests enjoyed the tranquil and romantic ambiance provide by this charming old hotel. However, few people other than the former staff know of the Guild's past and perhaps current hauntings. The Guild Inn was officially closed to the public in October 2001 and it remains to be announced what will become of the hotel and property. Truly the end of an era in Scarborough, however inside these pages you will get a taste of the Guild Inn's more darker side. Enjoy!


The Guild Inn is a place I have pretty much spent most of my life. It has held intrigue, fascination, as well as employment since my grandmother. The stories I have heard from her were passed on from employees who worked there shortly after the war.

The history and facts:
The Guild Inn was built in 1914 on top of the Scarborough Bluffs,originally called Ranelagh Park, it was built as a summer home for Colonel Harold Bickford and his family. The home consisted of everything that could be associated with a large and prominent family such as servants quarters, a nursery, library, grand stairway, six or more bedrooms as well as three guest rooms, and a basement which contained a boiler room, storage room, fruits and vegetable room and a laundry room. In 1921 Ranelagh park was sold and became a boarding school for the China Mission Seminary until 1923. In 1923 Richard Veech Look purchased the boarding school to house his family as a summer home and called it Cliff Acres. He was moved to Quebec with his family in 1927 due to his position in his company.As he still owned Cliff Acres while he was away, the home sat empty from 1927-1932. Rosa and Spencer Clark bought the property in 1932 and turned it into the Guild Of All Arts. They opened their doors to house the gifted in arts, in exchange for their room and board the artist would provide their work to display. This continued until 1942. The WRENS( Women's Royal Canadian Naval Service)were housed at what became HMCS Bytown II. The Wrens worked in secrecy there having all the locks changed on their doors. They continued their operation there until 1943. In 1944 the government took over the Guild Inn turning it into a recuperative centre for returning war veterans with nervous disorders. They housed hundreds of patients up until 1947 where it became the Guild Inn once again and has been operating since.

What I am now about to relate is not a historical fact as I have not found proof but I fully believe in the sincerity of my grandmother, and there are some strange quirks that just don't add up. My grandmother worked at the Guild Inn in the 1960's as a banquet waitress. She was told by the long time employees, who had worked there shortly after the war, that the government had created a tunnel from the Scarborough Bluffs to access the main building, which was some distance away. I believe this may have been done for soldiers coming down the St. Lawerence river and into Lake Ontario. There was also rumours that experiments may have been conducted in these tunnels during the war as well. These tunnels were constructed during the war, as the building only started out as a few rooms in the basement, and the original blueprints do not show them. I have used these tunnels myself when I was employed there to transfer back and forth between the main level and the downstairs banquet facilities.I have seen bricked off doorways that may hold that secret passage to access more tunnels.

I have been completely alone in the hotel and felt as if I was being watched through the shadows and followed through the narrow corridors. My mother had worked there for about 20 years and experienced many strange things.

There was a small mansion at the edge of the Bluffs called Cory Cliff which was built in 1912. Cory Cliff was used as a meeting facility in which my mother would set up for early in the mornings. She would hear loud footsteps walking upstairs over her head, knowing she was completely alone, she would still go and investigate the source. She never found anyone. Things continued to happen, such as toilets flushing on their own, doors slamming, taps would turn on by themselves. There was a secret passage way that was hidden behind a bookshelf but as you tried to enter the passage it became a brick wall. From what I have heard, the passage way was suppose to lead to the basement.My mother would leave the building at night knowing she had turned off every single light, to have them all turn on simultaneously when she was outside walking away from the building.

My husband who is now employed at the Guild Inn would also recount the same stories happening to him when he started working at Cory Cliff. Unfortunately, Cory Cliff was torn down in 1997 due to deterioration. I have spent many years here and with the history of my family, I would love to uncover the secrets the Guild Inn holds.


Webmasters Note - The above narrative was written prior to the announcement of the Guild’s closure and proposed restoration - redevelopment.
Read on for our investigation......