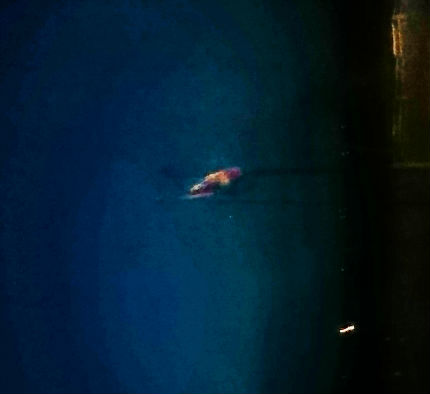 UFO details report: Viewed from inside my home, behind a window, I was just looking out my front window as the sky was almost dark about 9:30pm, I had taken a picture. Noticed a very fast airplane. There is a small airport nearby so I am used to seeing planes in the distance and have an idea of how fast they normally go. This one went extraordinarily fast, slowed, and circled around back in the general direction of the airport. I saw it do this 4 more times, and the last time there was another one joining it circling opposite to it. These military (in my opinion) planes had standard blinking plane lights and I could make out the body, they were smallish very fast planes with white and red blinking lights (steady blinking, steady flight pattern). In the area they were circling there was a bright, small blinking dot - the ufo by definition - bright white/blue, blinking, darting back and forth, circling, all very very fast, sometimes I caught a glimpse of another dot that appeared to be attached to the same invisible object. The ufo would move rapidly and then disappear, when the plane was coming towards it. It would then reappear in another spot, moving erratically and darting around the sky. This happened over half an hour, I live at the top of a hill and I saw this looking out over the farms and trees below. I took 3 videos with my camera phone but it is very dark and my hands moved around because I was trying to watch it myself. Not sure that I caught the blinky light. Maybe someone with video software could lighten it and see something. I was watching it through the window while videotaping it and I am very sure of what I saw. I also saw a similar thing a few months ago, very briefly, and did not get my camera in time. With the two planes circling I didn't see the blinky thing anymore. They circled for quite awhile afterwards. I know what I saw, it doesn't scare me.

Webmaster's note: The witness has kindly provided video and still images. Also provided are daylight comparison photos and video. The image posted has been cropped and enhanced with filters as just FYI it is impossible to say with certainty what is depicted in the video, but it does give very clear clues to the location it was filmed which is a private home in a rural setting, and in order to protect the privacy of the witness we will keep these offline and available to our colleagues only.

In further correspondence the witness adds:

"I would love to hear if you find out anything or are able to lighten the video. When I was watching while videotaping (and in between) I could see it much more clearly than what is on the dark video. Nothing else odd was happening. Other than that I have seen strange things like this once before in the last few months. It is just farm fields and trees below. And the headlights off in the distance look exactly like headlights lol. If I see it again I will try getting a better a shot and send it your way."