The Birth Of Spiritualism

The Birth Of Spiritualism

The Birth Of Spiritualism – The Story Of The Fox Sisters

In the year 1848 some astounding events took place in Hydesville N.Y. USA that began the modern-day North American Spiritualist movement. A lessor known fact is that central to these events were three young Upper Canadian ladies who were born in a small farming community; Consecon (near Belleville) Ontario.

The Fox family, which included three daughters Leah (Ann), Margaret, (Maggie), and Catherine (Kate); moved to Hydesville on December 11th 1847. However, it was on March 31st (the day before April Fools) that their lives would forever be changed by what was considered to be a classic and well-documented example of direct communications with the spirits of the deceased.

It began with a series of strange noises such as knocks and footsteps that could not be accounted for. There were vibrations felt, which affected the family’s chairs and beds as well. Both Mr. And Mrs. Fox were highly disturbed by these occurrences and quickly concluded that a restless ghost must plague their home.

Upon hearing the knocks, the children would try to imitate them by snapping their fingers and clapping their hands. Catherine is reported to have spoken aloud while doing so. “Mr. Splitfoot, do as I do,” she said and the knocks would then respond in kind! These first experiments progressed to the point were the children and their mother would ask questions of this ‘entity’ and devised a series of knocks to signify a yes or no answer. It was by this simple method that the Fox family learned the following about their otherworldly guest: “it was a man, aged thirty-one years, (who) had been murdered in this house and his remains were buried in the cellar.”

The Fox family invited their neighbours and other passer-bys to be witness to these astonishing events and with multiple observers’ looking on; the basement of the house was dug up – producing nothing. It was not until the year 1904 that excavators unearthed a human skeleton from the cellar area of the Fox home. Whether or not this is indeed ‘proof’ that a tormented spirit was indeed the cause of the family’s experiences remains a matter of conjecture.

News of the happenings at the Fox home spread like wild fire. The press loved the story and before long the girls’ seemingly amazing abilities to communicate with the dead were turned into a stage act. The more people that came to witness the communications first hand - the more these events seemed to escalate. Other spirits began communicating with the sisters, and phenomena such as objects moving and the table lifting by supposedly unseen hands were also reported. This further fuelled the rising popularity of Maggie, Kate, and Leah whom were taken under the wing of the world famous PT Barnum. They became the greatest known mediums of their time and modern Spiritualism in North America was born. 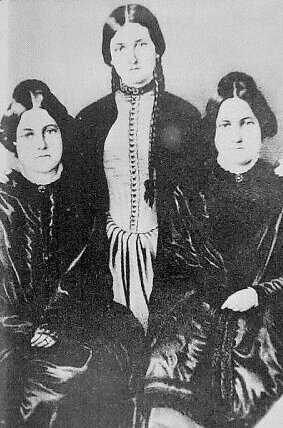 It was a series of confessions made by Margaret Fox later within her life that confirmed to professional skeptics and skeptically minded scholars that their opinions that Spiritualism was in fact rife with con artists and scammers who "preyed on the weak minded" and "nothing more than parlour tricks" was correct. These confessions made by Margaret included the admission that the knocks were produced by the cracking of her toes among other deceptive practices that would elicit the desired effects that were falsely purported to be that of spirits or ghosts. She further went on to publicly state that the Hydesville events were nothing more than a pre-April Fools prank, which had gotten out of hand.

At the time of her confessions (which are reprinted in “A Skeptic’s Handbook To Parapsychology” by Paul Kurtz, 1985, Prometheus Books) Margaret was a practising Catholic who viewed Spiritualism as a “widespread evil” as did other traditional religions during it’s hey days that condemned it. This belief that what had occurred was evil could be at the heart of her confession. She later recanted her statements, and in fact tried to revive her involvement with her sisters as a practising medium, but the damage had been done. At the time of their deaths the Fox sisters were rumoured to be both penniless and suffering alcoholism.

Despite these confessions from one of the originators of the movement and waning interest at various times since it’s inception; Spiritualism has never totally died-off (forgive the pun). This is evidenced by the continued interest in psychics, mediums, and practitioners of the occult with a leaning towards the Spiritualist path, and the sales of various devices such as ouija boards that are used to communicate with spirits. Most major cities throughout Canada and the USA have Spiritualist Churches, which are affiliated to the Spiritualist movement and its philosophies.

Believers will tell you of experiences witnessed first hand that defy any other explanation, but that which Spiritualism purports to offer. They will also cite that Margaret Fox’s confessions are full of inaccuracies, which may or may not have been the intention of the author at the time of her writings. And we cannot forget the fact that it is a matter of historical record that a body was found in the Hydesville home (as the ‘spirit’ said it would be).

Whatever the real truth of the matter and one’s particular opinions on it; from a historical perspective of the paranormal The Fox sisters were and continue to be those who defined modern day spiritualism and mediumship in North America.

A Skeptic’s Handbook To Parapsychology, by Paul Kurtz, 1985, Prometheus Books