Just after midnight on August 25, 1995, a bright fireball was seen streaking over western Pennsylvania, Ohio, Michigan, West Virginia and southern Ontario. The fireball was so bright homes were illuminated as if it were the middle of the day. Residents in Windsor, Ontario, Canada - just over the bay from Detroit, Michigan - saw the object descend into the area of a trailer park. Some followed the trajectory of the descending fireball to the trailer park where they found several trailers on fire.

The news of the fireball spread quickly around the world. Reuter's news agency issued a report stating,

"PITTSBURGH (Reuter) - An unusually bright meteor lit up the midnight sky across four states before slamming to earth at an abandoned trailer park in southern Canada, officials said Friday.

The Carnegie Science Center said it received dozens of phone calls from Pittsburgh residents curious about what they had seen -- and whether it was a UFO.

The Meteor was sighted early Friday in western Pennsylvania, Ohio, Michigan, and West Virginia, according to Pittsburgh radio reports. Some residents said their homes were completely illuminated by a bright flash in the sky, the reports said.

Firefighters in Windsor, Ontario, early Friday extinguished a blaze at an abandoned trailer park that was believed to have been caused by a meteor hitting the earth, said a Windsor police official.

"We haven't confirmed yet that it was a meteor, but we think it was," said Windsor police Sergeant Lloyd Grahame. "We have police and firefighters out there now trying to recover something. There are rumors floating around that it was a meteor three times the size of a beachball."

Just across the bay from Windsor, a TV crew from City News based in Toronto was filming an interview when people began pointing to the descending fireball alerting the film crew. The cameraman swung his camera around and caught the fireball descending behind the clouds just before it crashed into Windsor, exploding as it went down. This video footage of the descending fireball was shown on CNN throughout the day and on local TV stations later on the night of Friday, August 25, 1995.

When I saw the footage on CNN earlier in the day, I noticed a bright object visible for about 3 seconds heading up towards the exploding fireball as it descended over Windsor, Canada. Wondering if I had really seen the bright object near the fireball, I made a point of recording the news segment when it was broadcast on a local TV station based in Dallas, Texas later that evening. Again, the bright object heading swiftly up towards the fireball appeared in the news broadcast and I recorded it on video tape. Reviewing the video footage over and over, there was no doubt in my mind that something was recorded going towards the fireball as it was exploding and descending over Windsor - but what was it?

Officials I contacted either denied the fireball had crashed into Windsor, Canada or claimed to know nothing about the fireball other than what was presented on the news. And...no one knew anything about the bright object recorded heading up towards the descending fireball in the video footage.

I have a lot of questions left unanswered. Why were the eye witnesses' testimonies ignored? If they saw where the fireball came down, why did officials claim there was "no evidence" of a meteor or fireball? What about the video footage? What was it that was seen descending into Windsor exploding as it went down? And what was that bright object heading up towards the fireball?!

When I showed the video footage to various audiences during my lectures, all could clearly see the bright object ascending quickly towards the descending fireball. Many people said it looked like a "scud missile" being fired at the fireball as it was coming down. If the ascending object was some kind missile, why would anyone be firing projectiles at a fireball? Was the fireball really a meteor? What was it that someone's military may have launched missiles to intercept?

Over the years I have come up with several hypotheses about the Windsor incident. Perhaps the fireball was some kind of space debris or meteor re-entering earth's atmosphere large enough to present a danger to populations below causing military bases to launch intercepting missiles to reduce it's size and the amount of damage upon impact. Efforts may have also been instituted to reduce the risk of an international incident. Maybe it was an unauthorized aircraft from another country shot down by American military defense and official denial used to hide the truth and avoid alarming the public. It could also have been a UFO shot down when it entered restricted territory. And what, if anything, was recovered from the scene of the fires as first indicated by the Reuter's news agency?

We may never know the truth behind the Windsor incident. The video footage and eye witness testimonies clearly indicate the official denial was an attempt to hide something from the general public.

What really happened in the United States and Canada on August 25th, 1995? 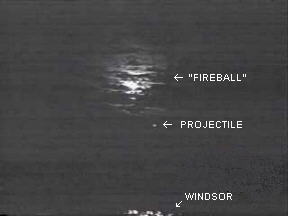 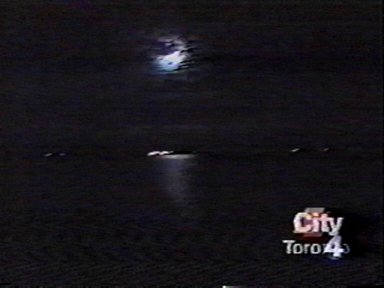 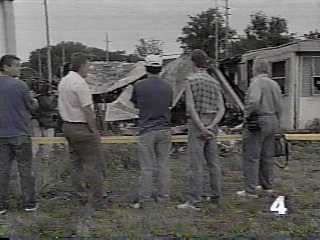 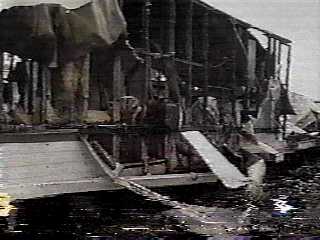 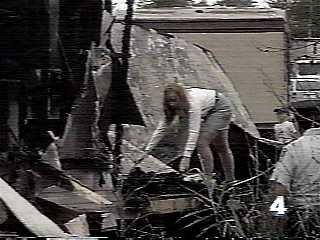 University student searching through the remains of the burnt out mobile home for evidence of a fireball. (above) Could something have crashed into it causing the roof to collapse or was this a result of the fire?

Please note that these images were obtained through City -TV and used with permission.

Our personal thank you and appreciation to Amy Hebert for making this investigation available to our website. Please visit Amy’s website entitled The IFO Database, which is an excellent tool for ufo investigators. Also look for Amy Hebert’s soon to be published books which will offer an in-depth and thought provocative look at the UFO enigma.