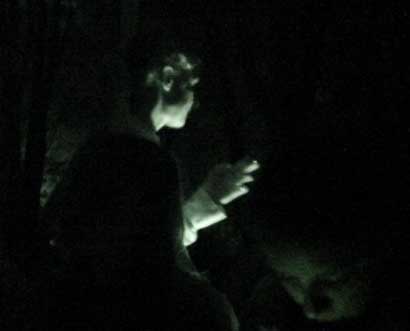 - Children of the night... What horrifying farie tales they make! -

Everyone reading this knows what a vampire is, right...?

#1: A vampire is a dashing, romantic, yet terrifying human-creature combination that is immortal as it is as much dead as it is alive. It preys on the living for it's sustenance, blood or "life-force" (usually in the form of the living's blood) that displays mostly human characteristics and is effectively, a very cool thing indeed! (The "Bela Lugosi Dracula" model... with a little of the "Anne Rice" model tossed in for good measure...)

#2: A vampire is a demon-like, undead person (dead, but re-animated by some means) that preys on the blood of the living to sustain itself. (The "Buffy the Vampire Slayer" model)

#3: A vampire is a lithe, immortal, dead-like creature of evil, yet is hypnotic to it's victims and lacks remorse for it's fatal actions in keeping itself alive. (The combination "Anne Rice/Nosferatu" model)

#4: A vampire is a foul smelling, feted breath, bloated, rotting creature that is more "fat-corpse" like in it's appearance and is definitely a dead person that has awakened due to some 'deed' and is now preying on the living. (The "Eastern European Legend" model)

Truth is, all of the above, and then some, seem to be the answer.

The origins of the vampire go far back into history... in fact, long before Vlad Tepes (or Vlad Dracul to his friends) was even a twinkle in his daddy's eye.

Back in the good old days, "bad things" just didn't happen. There was always a reason and usually a scape-goat. Not too many hundred years ago, it was all the fault of the "witches"... with some, even today, it's still blamed on "the little people". More often than not, ill tempered deities were to blame.

Well, one convenient scape-goat that was unlikely to blame other's who blamed them was the dead! Yup, simply ceasing to exist in this mortal coil didn't preclude you from being the obvious cause of "something".

So, in medieval (and possibly/probably before then) Eastern Europe, the "Vampyr", "Nacht Zehrer", or a selection of monikers, came into folkloric traditions... that may even have more "ghostly" roots!

Somewhere, down this line at the time, someone saw what they knew to be a "recently dearly departed" friend or family member post mortem. Either that evening or the next day, they came down ill. Now, in today's wonderful world, we might say; "Grieving led to a bad dream which led to the person not sleeping properly which led to a light illness." But this was not today and sleep illnesses and mental issues were relatively unheard of... at least, they weren't "properly" explained and documented.

So, they'd dig up the corpse to find out if it had gone on any late-night excursions...

One can only imagine the horror of these old-time towns people when, shock of shocks, the corpse's finger nails had grown... and hair was growing... it was bloated, not emaciated, blood trickled from the corners of it's mouth, new skin was seen looking pink and healthy under the dying and now curling-up dead first-layer of skin and worse yet, it's eyes may have indeed been open! The foul stench also must have proved some other sort-of demonic thing at work! No doubt, this thing HAD to be killed!

Now, I can't say who did this first, but the next trick truly clinched the deal... They took a wooden stake, placed it over the chest of the corpse, hammered it in and... EGADS! More "fresh blood" flowed forth and the corpse made an audible "groan" from it's vocal chords and mouth! EGADS! It's ALIVE and the fresh blood meant (double-Egads!) that it was feeding off the living!!!!

See, it all makes sense, doesn't it? To some reading this, they may think I'm spinning a fanciful yarn and nothing like this could have EVER happened... but it did... and it's not as "paranormal" as you might think it is. Read on........