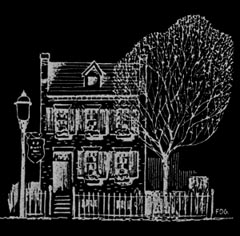 Haunted, Hoax, Or Wishful Thinking........
Mackenzie House is arguably the most infamous structure in Toronto if not Canada that is reportedly haunted. Pararesearchers has recently (April 2003) visited the house located at 82 Bond Street and examined the reports and independent investigations of others in regards to William Lyon Mackenzie's former home. The results follow:

Who was William Lyon Mackenzie?

For those not familiar with Toronto's history, W. L Mackenzie (1795-1861) was a controversial newspaper editor, leader of the failed 1837 Upper Canada Rebellion of which he was convicted of high treason, and Toronto's First Mayor. He was also grandfather of W.L Mackenzie King, Canada's 10th Prime Minister (1921 to 1948). The house at 82 Bond St. was purchased for Mackenzie and his family by friends and supporters following his return from exile (10 years) in the United States.

Mackenzie House is a museum located at 82 Bond street, nearest intersection Yonge/Dundas. In the 1940's a private foundation was set-up to preserve the house and it was opened to the public as a museum in 1950. It is now operated by Museum and Heritage Services, Culture Division, City of Toronto. .

It is one of the few locations within the province that are quite open about their ghost stories - in fact selling ghost-related books, bags and tee-shirts.

As can be evidenced by the above the most intriguing of the reports have all occurred prior to the 1980's. Let us examine these first:

Strange sounds such as the footsteps, the printing press, and piano (neither belonging to the family) can be discounted to a lessor extant as there is no documentation to suggest that anyone actually sought the source. Through previous investigations (see Fort George) we have seen examples as they were occurring of witnesses mistaking natural sounds for "ghost" activity particularly when they were aware of a ghost story attached to a particular dwelling.

The reports of apparitions (including possible physical assault) are more compelling in that by description they tend to fit William Lyon and his wife Isabel Mackenzie's description. However, at least two of the witnesses (caretakers) have recanted their stories. It is now a matter for the reader to decide if the reports (all/any) hold merit.

Another strange report (circa 1962) involves workmen whom claimed to have discovered a noose hanging over the stairwell. It seems logical to assume this was a prank based on the history as opposed to “paranormal” phenomena. Why, would the “ghost” of Mackenzie fashion a noose within his own home? I’m sorry, but this sounds more like a B horror movie plot than actual recorded anomalies.

On the surface there seems to be no reason to question the sincerity of the reporters, however we would be remiss not to point out that at the initial surfacing of these reports the original funding for the museum was nearly exhausted. The reports fueled the imagination of many, were publicized in local newspaper accounts and in turn increased public interest in the museum itself. As a result some believe that the reports were nothing more than a publicity stunt. This in fact is NOT an accusation on the part of ParaResearchers, but an observation.

We will also point out that there are no documented reports of ghostly activity prior to 1960 - nearly 100 hundred years after Mackenzies death nor is any of the furnishings etc original to the location.

The reports examined from 1980 through 2003 are numerous, but not compelling. Orb photography has been clearly explained by several researchers including our sister organization as being of mundane origin.
Please see article here
Feelings of strangeness, fear and dizziness can be readily explained by the severely uneven floors, coupled with poor lighting. The writer personally experienced the same in the main floor hall and the second floor hallway - in particular outside of bedroom one. These locations match the areas most frequently reported. This loss of equilibrium and in turn anxiety may also produce feelings of being touched.

Visions or the experience of seeing an apparition solely within one's mind is a matter of belief.

In our opinion there is little evidence to suggest an active haunting is occurring at Mackenzie House. Historically, this may or may not have been the case, however in comparison with other locations found within Ontario and indeed across the world Mackenzie House does not offer the investigator much to go on.

Ghosts or no ghosts please DO visit this museum as it offers a glimpse into a most fascinating man and an equally fascinating part of Toronto's history. To be quite honest the writer has far more enjoyed learning the history of William Lyon Mackenzie than the ghost stories surrounding his former residence.
Sources - Recommended Reading:

Secrets Of The Supernatural
By Joe Nickell - (c) 1988 Promentheus Press