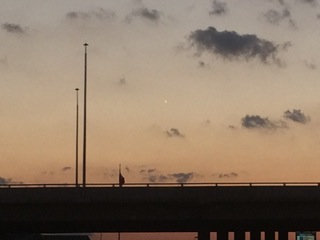 UFO details report: "Hi this is what we experienced tonight, would like to be left anonymous

Around 7:25 pm on September 22nd our family was about halfway driving home from Niagara Falls to Hamilton Ontario.

My husband pointed out a light in the sky to me and asked what I thought it was.

He thought it could be a planet.  It was too big and too early to be a star.  I thought it was way too big to be a planet.  The last time I saw Mars it was nowhere near that size.   At certain times it looked long in height instead of circular.

The size and brightness of it didn't match to be an airplane, nor was it moving.  We watched it for awhile talking about what it could be and what it wasn't.

After a few minutes we noticed it had darkened and looked more in colour to the clouds.  My immediate assumption was that it was just light from the sunset lighting up a small cloud in a brighter than usual manor.  However my husband said 'no, it looks like a plane or something now leaving a trail'.

Sure enough it was now moving, we could see a trail of jet stream behind it.  The object it self was now less then half the size it appeared to be beforehand.  The oddest part was it was traveling up.  Getting smaller and smaller and the jet stream following behind it.  At last we saw it before it disappeared above us out of our range of sight the light was gone of the object it looked like a tiny black circle leaving a small jet stream behind as it rose out of our atmosphere?

We are not people who go looking for these things.  Sure we've seen a few UFO shows now and then.  Before we couldn't say that we believed in UFO's or cared for what they were.  We didn't ever expect this! It and this was a crazy experience we won't forget.

We are talking about how it was as though we were watching a meteor, but the whole thing in reverse.  At first it was a bright fire light in the sky and then it shot up out of our atmosphere as a black dot.

I took some sequenced photos.  My phone does not have a good camera for video.  I took about 20 sequenced photos.  Some were blurry due to driving 115km/h on the highway!  I sent some of the best shots.  You can see it sat in front of us while we were driving for at least a few minutes.  Then it shot up leaving a trail and soon was out of sight."