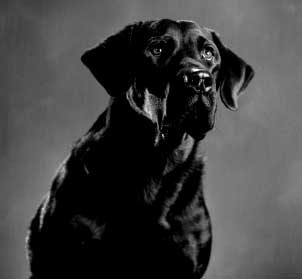 "I was only about 14 years old at the time. We lived in a small house in Hamilton, Ont., and because there was not much room, my parents gave me the use of a tiny room in the basement as my personal "play room". (That is, my own space with a desk where I could read, do my drawings, art projects, etc.).

I liked the room, and spent many happy hours there. But there was something about the basement that made me feel very uneasy. I always felt like there was "something" in that basement with me- although never in my play room. It was odd because the basement was so small, you could see the entire thing from my playroom.

One day, as I was sitting at my desk, (with that uneasy feeling again), I glanced up and saw a dark form lope past the doorway. It was the form of a large, black dog. There was blood all over it. For just an instant, I had the impression it was in great pain and despair. I got up and walked out into the basement and stared at where I'd seen it go, and although it had vanished, I had the strong feeling there was a dog buried there, under the concrete floor. I couldn't explain that feeling, I just knew that there was.

I told my parents, and they just shrugged it off. I didn't think much about it after that. Then, about a week later, on a nice summer night, my parents decided to go out for a walk around the block to enjoy the evening. I was home alone, except for our chihuahua. My parents (who were very safety-conscious), locked the door when they left, and I went upstairs to wash my hair.

The basement door was right at the bottom of the stairs, and there was a hook latch on it. Suddenly "something" hit that door (from the basement side), and the latch rattled. Our dog was growling seriously, his hackles up and staring straight down at it. Then I heard it again, and this time could hear "claws" sliding down it, as if a large dog was jumping against that door, trying to get out.

This sound continued, several times, with the initial "thump" and then "scratching", and the door banging against the latch. I was terrified! There was no other way out of the house but to go down those stairs past that basement door, so I grabbed up our chihuahua in my arms and cautiously made my way down. As I got to the bottom, something hit the door again, and I saw it jar against the latch! Our dog was snarling in my arms.

With that, I flew out the front door and sat on the front steps with our dog waiting for my parents to get home. They were furious to find me outside. I told them what happened and they were skeptical, but my dad went to the basement door to check it out. When he opened it, we found long scratches in the soft wood of the door, just like those a big dog would make with it's claws if it was jumping against it. My dad was shocked, but couldn't explain it. He checked the basement, and all the windows, but it was all secure. Nothing/no one could have gotten in.

I never went down there, again. It had been a terrifying experience- one I knew I hadn't imagined, because my dog had sensed it too. After some thought, I realized there had been no reason to be afraid. To this day, I believe that someone had abused this dog and kept it locked in that basement; that ultimately, they had beaten it to death and buried it there. This dog had only wanted to be free of it's prison. Maybe it was asking for my help.

One day (when no one was home), I cautiously opened the basement door. I whispered, "It's ok, come on out, go on to where you belong."

I don't know if that worked or not, but nothing like that ever happened again, and I never felt that "presence" again."

Our thanks to the witness for sharing this experience with us, and for allowing us to share it with you.